10. Summer needs to end. I live in central Texas and summer typically starts by early April. Six months later and we’re two-and-a-half-weeks past the official “first day of autumn” and Texas has teased us with three, perfect fall days (amazingly enough, one actually ON the first day of fall, which I don’t think has happened in the ten years I’ve lived here). In between, it’s back with 90 degree weather and worse humidity than our drought-ridden summers. I’m ready for SUMMER TO END.

9. Summer is too damn expensive. Thanks to the six months of summer mentioned previously, my electric bill runs through the roof. Add that to how outrageous the cost of water is and how the grass planted in yards will die in droughts if you don’t water it (and we’ve been in a drought since about 2009), I could probably send my son to private school just in what I pay to keep my house cool and lawn alive.

8. The scent of fall is magical. Even in Texas where the leaves barely change and half the trees keep their leaves until the spring ones push out the old, there is a change to the smell in the air. It has a coolness, the taste of change, and invigorates me more than a liter of caffeine.

7. Fall makes mommyhood easier. I can run errands without back and boob sweat trickling down my body because the car and parking lot are 110 degrees. I don’t feel like I need a shower because I threw something away in the garbage can or walked into the garage for thirty seconds. The kids fight bedtime less because it’s dark outside. If your four-year-old falls asleep in her car seat, you don’t have to leave the car running for 90 minutes, but can park and open the windows. You can send kids outside without worrying about heatstroke or (if you can’t leave them alone) melting into a sweat, sticky mess which you will not get to shower off until they are in bed. The list goes on.

6. My children love playgrounds. My kids could live at parks and playgrounds but many here do not have adequate shade to make it possible during anything but the earliest or latest hours in summer. Since I am not a morning person and they refuse to sleep in if we let them stay up late, this means park visits are few and far between during summer. Fall and “winter” mean they get to spend hours exploring and burning off energy that has been trapped (except for pools visits) for the last six months.

5. It means the mosquitos will die. Soon. My kids are high on the mosquito “desired blood donor” list. They get eaten alive if we dare venture out in the cooler twilight air of summer without a total coating of Deet (which I hate putting on their skin). Fall means winter (the Texas version) is coming and the mosquitos will go away… until February (aka “Texas spring”) hits. 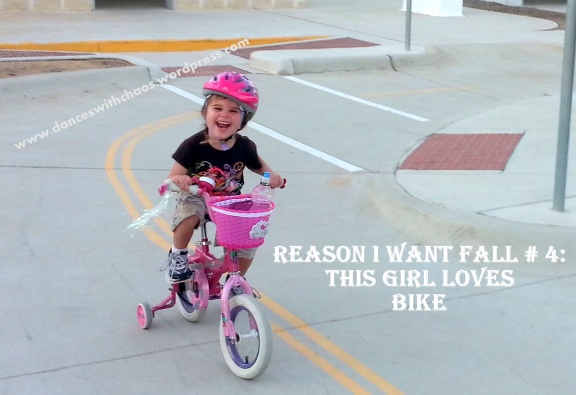 My four-year-old loves to bike and is ready to say good-bye to the buggy.

4. Family bike rides rule. Since my son learned to ride, we entered The Age of Family Bike Rides During Weather Permitting Times of Year. They are awesome. I bought a bike (I hadn’t had one since college) and a buggy (for Lil Diva) and a bike rack for my van (because kids can’t ride in bike lanes consisting of a single painted line separating it from cars speeding 50 mph) when The Tackler  turned five just so we could go riding together. We hauled all of ours bikes the 900+ miles to Iowa in June because they have awesome bike trails. Now Lil Diva has a tricked-out bike with training wheels and is also in love with bike riding, so this year means it’s the first time ALL FOUR OF US are pedaling. I can’t wait.

3. Fall sparks the muse. This is tied to #8, but some of my most creative writing periods are when I can pull a chair onto the deck, and just write. The air. The trees. The breeze. I don’t know what it is exactly, but my brain fires and my fingers fly and after the dry spell I’ve had, I need all the help I can get. 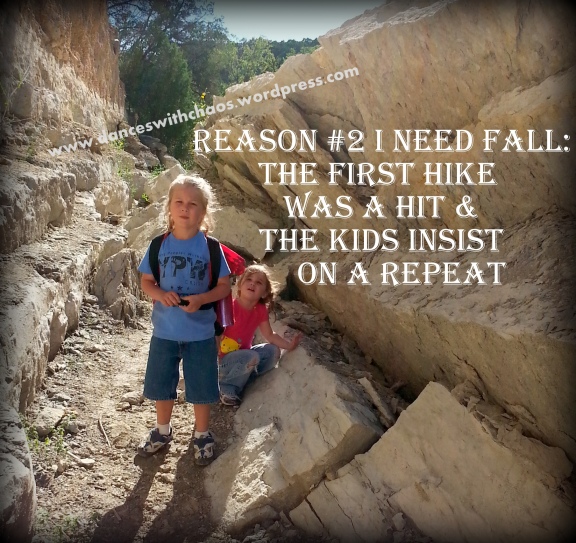 One of best days. Ever.

2. I’ve had a taste of it and I don’t want it go. The three “fall” days so far are a tease, a tiny taste of what the following months will bring stuck between heat and humidity and a summer that won’t let go. We milked them, knowing the real fall isn’t here yet. We spent hours watching our children enjoy the park we’ve avoided for months because it has zero shade. I took my kids hiking for the first time and taught my son how to skip rocks (see video with his happy dance). Sunday I spent five hours at two different parks alone with my kids and I loved every minute. You know, as opposed to the “stuck inside because it’s hot out and I want to lock myself in the bathroom and hide” parenting moments. 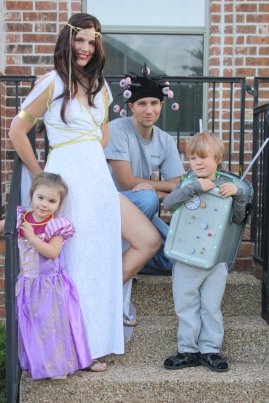 We always try to go for the “least likely to look like an actual family” prize. Introducing: Rapunzel (minus the hair), the Athenian Goddess, Eye-ball Hat Dad, and The Robot Who Decided He Didn’t Want to Wear His Helmet, Arms, Legs, and Needed Last Minute Padding with Dish Towels for the Arm Holes but Who’s Costume Rocked Once it Got Dark.

1. Halloween with children. Seriously, it is the best thing. Ever. I will cry the day they grow up and are too big to trick-or-treat. For now, I’m breathing in every amazing moment that fall has to offer, including the glee over giant spiders and giggles over giant inflatable pumpkins.

Are you looking forward to fall or do you have it already? What season do you long for? Why?

Kelly K has learned the five steps to surviving of motherhood: 1) Don't get mad. Grab your camera. 2) Take a photograph. 3) Blog about it. 4) Laugh. 5) Repeat. She shares these tales at Dances with Chaos in order to preserve what tiny amount of sanity remains. You can also find her on her sister blog, Writing with Chaos (www.writingwithchaos.com) sharing memoir and engaging in her true love: fiction writing. It's cheaper than therapy.
View all posts by Kelly K @ Dances with Chaos →
This entry was posted in Dances with Chaos, Top 10 List and tagged biking, fall, family, humor, in the moment, kids, life, outdoors, seasons, videos. Bookmark the permalink.