I am cursed blessed to be a stay at home parent. This means my children drive me crazy are my employers. The vacation time and sick days are nonexistent but we spend lots of quality time together.

The monetary pay is also lousy.

This means when it comes time to visit family in Iowa, unless a miraculous deal materializes from an airline, we drive.

Why we do the drive…

While there are about 1,235,937 things I would rather do than be driving across the country, I have to admit—my children are normally decent travelers.

This is aided greatly by The Built-in DVD Player.

Okay, I’m lying. This is BECAUSE of the DVD player. My children can handle about two hours (a day) of sitting in car seats, looking out the windows, and reading books. After that, all bets are off.

When half of your trip is seven hours, the DVD player is a vital necessity.

But there are some things a DVD player cannot help with….

It was Thursday, the day before we planned to drive from Iowa to Kansas City to visit and stay with most my awesome friend from college, Katie. We’d just taken Lil Diva on a boat ride with my father-in-law and followed it with lunch. 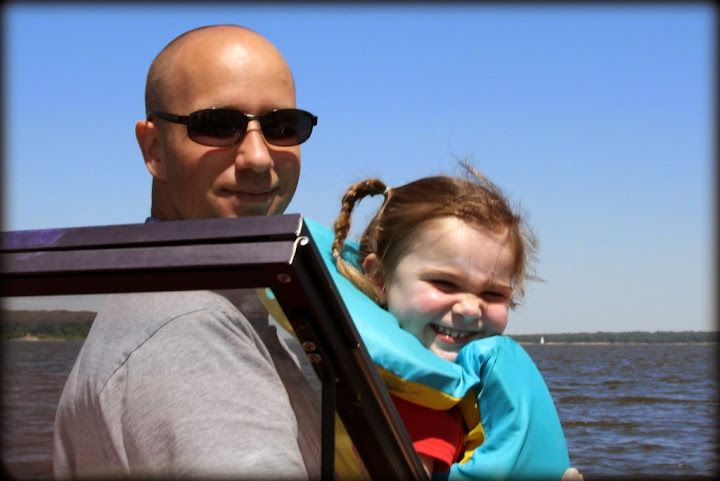 Lil Diva approved of the boat ride. Note pictured: my husband creatively cursing when he jumped into the cold water to ski.

All I did was swish some lukewarm water in my mouth while taking a drink.

A pain unlike any other hit me and tears welled in my eyes.

From this point on, my tooth would constantly have a dull throb, punctuated with stabbing pain.

Pain that would increase each day.

I was 930 miles from my dentist, so there was little I could do other than pop Advil like candy.

All I remember on the drive from Iowa to Kansas City was my tooth hurt.

We stayed with Katie on Friday and Saturday night. Both nights I awoke in pain, my tooth throbbing. I increased my Advil intake but it only took the edge off. 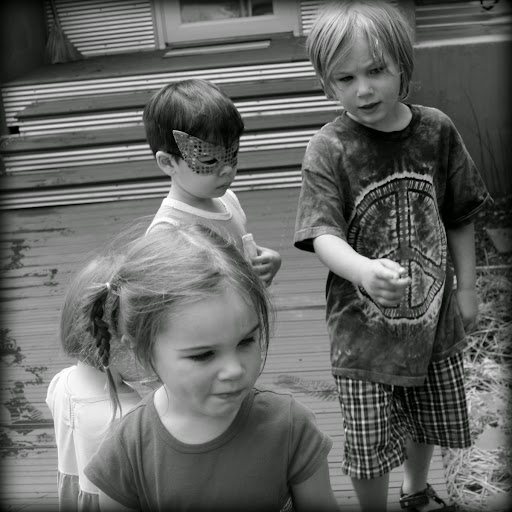 Our plan was to leave Sunday morning. Early.

Only that isn’t what happened…

Lil Diva woke up four times that night, the first around midnight. Each time she had to use the potty for a bodily function she normally performs during the day. Over and over again.

Neither she nor my husband were happy about it either (note: I slept through most of it, and when I did wake up, I was afraid to move for fear of making the tooth throb even more).

The next morning whatever she’d eaten hadn’t fully worked its way through her yet (we suspected pizza only she’d eaten the night before, minus the few bites I’d consumed). She spent the entire morning running back and forth to the bathroom.

Once she failed to run fast enough.

It is impossible to road trip with a three-and-half-year-old in such circumstances—on a good day you’re lucky to get five minutes warning when they need to use the potty—and we waited it out.

After lunch most of what she’d eaten appeared to have cleared itself out so we tempted fate and began the trip.

We got lucky. The only other bout she had was while we were stopped and had to do a double potty visit.

We hit some odd grooving on the road. An odd hum echoed into the car as the wheels flew across the interstate.

The pitch of this sound did something to my tooth, and a pit of nausea began to grow in me.

It should be noted I have never been carsick in my life. Ever.

Unless I was sick before I entered a vehicle, I have never felt nauseous from riding in a car.

Maybe it was trying to use Sudoku as a distraction. I switched to reading from my Kindle and the feeling remained (note: on the trip up, I read for about 7 of the 10 hours we were on the road that day with zero issue). Maybe it was the two bites of pizza I’d eaten the night before (the same kind Lil Diva had). Maybe it was the toothache.

Or all of the above.

We were only ninety minutes into a ten hour trip.

We stopped at a rest area and I bought some Pepto-Bismol, hoping to quiet the nausea.

Ten miles south of the rest area I told my husband to find somewhere to pull over and we spotted a hotel off the tolled exit.

We parked and I wasn’t ten feet from the car when I proceeded to empty the entire contents of my stomach.

It made me very glad I had the plastic garbage bag the gas station attendant had given me at our last stop (following the usual checkout conversation: “Hi, how are you today?” “How do you think I am?” I replied, nodding at my purchase of Pepto-Bismol. She gave me sympathetic look and handed me three trash bags from behind the counter. “Just in case,” she told me. I love her to this day for this simple act.)

I felt better afterwards… for about ten minutes. Then the nausea was back.

We stopped at the next rest stop, again. This time I only gagged, but as my stomach was empty, nothing surfaced.

This is when another issue arose, quite literally, into the sky before us… 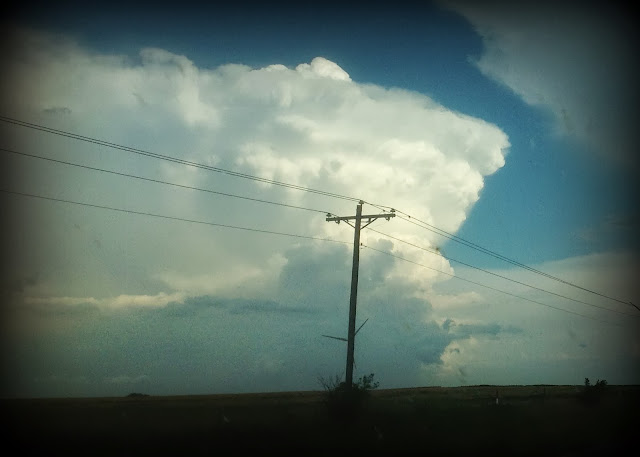 The photo does not do the height of these clouds justice…

We were still at the rest area and decided to use its wi-fi to see exactly what the giant thunderheads blowing up directly south of us were doing. Our trip called for us to drive through Moore, Oklahoma again, and the damage caused by their May tornado was still fresh in my head after witnessing it firsthand on the drive up.

The Moore, OK tornado crossed the interstate and you could see at least a mile’s worth of damage when we drove through two weeks later. Most of the “buildings” here looked like containers/dumpsters for clean up.

No tornado warnings. Yet. Just lightning. Wind. Hail. Up to golf ball size.

I declared this the perfect opportunity to call my dentist and see if I could get a prescription for pain and anti-nausea medication.

Of course, there wasn’t a Walgreen’s for at least sixty miles. We were in the southern part of Kansas, after all.

I really didn’t want to drive through 20 miles of severe weather.

Multiple phone calls, more I-think-I’m-going-hurl-but-don’t visits to the bathroom and an hour passed. The Kansas severe cell moved east, freeing the interstate, but another in northern Oklahoma refused to budge. Another cell was far away but headed toward Oklahoma City and had baseball size hail.

And we were still at the rest stop.

Have I ever mentioned I am paranoid about hail since March of 2009, when golf ball hail poured on my house for fifteen minutes (resulting in us needing a new roof) and my poor husband—stuck in rush hour traffic—had his windshield smashed by tennis ball hail (resulting in car being totaled out)?

We drove into Oklahoma until we were close the monster cell, giant anvils reaching far into the sky, and made a decision: we’d detour around it. We go to a Walgreens in Enid, Oklahoma. It didn’t look to be THAT far away. Google had several rural road options to take and we’d have flexibility to avoid additional cells that popped up.

Only that isn’t quite what happened.

Kelly K has learned the five steps to surviving of motherhood: 1) Don't get mad. Grab your camera. 2) Take a photograph. 3) Blog about it. 4) Laugh. 5) Repeat. She shares these tales at Dances with Chaos in order to preserve what tiny amount of sanity remains. You can also find her on her sister blog, Writing with Chaos (www.writingwithchaos.com) sharing memoir and engaging in her true love: fiction writing. It's cheaper than therapy.
View all posts by Kelly K @ Dances with Chaos →
This entry was posted in Dances with Chaos, Vacation and tagged car sick, family, food poisoning, humor, life, toothache, travel nightmares, traveling with kids. Bookmark the permalink.