We had a plan last November to take my children to see Disney on Ice while we were visiting in Iowa. I figured both children were old enough plus I’d have enough adult help if one of them got bored.

Plans fell through as my family experienced our worst Thanksgiving.

Fast forward to several weeks ago and a local blogger (Rebecca of “R We There Yet Mom?” who is awesome at organizing events mentions there are spaces for a few bloggers to attend a Disney on Ice show for free.

The catch: you can only bring one child. And it was at 7:30 PM on a Thursday.

Excited at doing something for free that I’d wanted to do anyway, I jumped at the chance.

Then I had to decide: The Tackler? Or Lil Diva?

Knowing from last year how there are multiple Disney on Ice Shows with varying character appearances, I went online to see which show I’d signed up for. It turned out this show was “Worlds of Fantasy”, and while it featured Cars and Toy Story 3 characters, it also had a hefty chunk of Tinkerbell and The Little Mermaid.

It made my choice easy, thanks to The Tackler’s newfound tendency (since beginning kindergarten) to say, “Princesses make me want to puke,” whenever Lil Diva wants to read or watch any princess story.

I had no wish to listening to any whining. 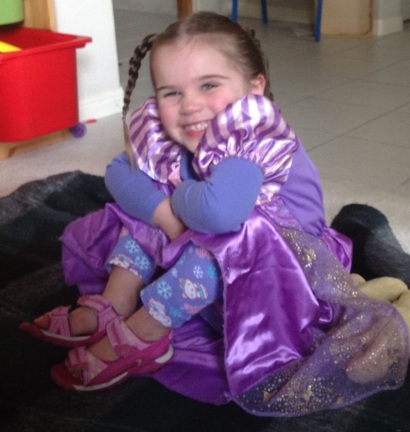 Lil Diva is modeling her purple Hello Kitty pjs (long sleeved because I knew the ice meant a freezing building), with her Rapunzel dress on top.

Lil Diva attended the event in her pajamas in case of early cratering, and at the last minute I dug out last year’s Rapunzel Halloween costume for her to wear over it.

I carpooled with Helen, another blogging friend and her little girl—who quickly became a BFF of Lil Diva—and we set off.

We arrived with seconds to spare at “the blogger suite” and Lil Diva was instantly sucked into the show as Mickey, Minnie, and friends skated onto the ice.

When Mater and the rest of the Radiator Springs crew entered I was hit with regret that my son wasn’t there to see the cars drive around the ice.

Then Ariel and Tinkerbell took over Act 1 and I knew I’d made the right choice.

Also? Twenty plus years later and I still remember The Little Mermaid. VERBATIM. 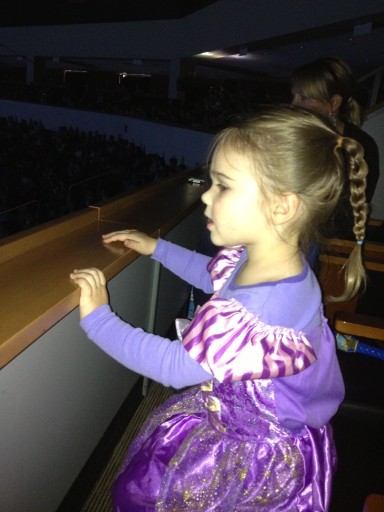 Taken with Helen’s phone camera so very washed out (it was quite dark). She had this amazing smile about three seconds before, but every time I tried to capture it, she’d go back to “transfixed” mode.

And Lil Diva’s face was PRICELESS.

I only wish I’d had a video camera capable of focusing the dark to capture it.

The awe and amazement, the joy at seeing these characters “in real life” spread across Lil Diva’s face was beyond words. I could see the magic spun as she clapped and cheered for the characters.

I had to explain—again—this was an ice rink, not a roller rink, and it was a show like the circus—we could only watch.

The munchies kicked in and we helped ourselves to the suite perks: popcorn (for both of us and cans of soda (for me) from a mini-fridge.

We raced for the bathroom during intermission as she admired all the other little girls decked out like their favorite princesses.

Toy Story 3 was the entire second act and during the “introduction” scene of all the characters, she was entranced, pointing and clapping as each one entered, especially Jessie, Woody, and Buzz.

By that point it was 9 PM and she’d hit her limit. Toy Story 3 heavily targeted Barbie and Ken’s scenes—more than Woody’s or Buzz’s and she’s not a huge Barbie fan. They had the entire Ken-Modeling-Clothes scene from the movie, which I admit was likely put in there for the adults and had me chuckling, but this is when my three-year-old finally lost her zombie-like trance.

Still, we persisted to the end (helped by more popcorn) as she played musical chairs with some of the other children and I regretted wearing shorts into a building with an ice rink, but glad I’d brought my jacket (in my defense, I think it was 85 and humid when we left and I couldn’t stomach wearing long pants).

The show came to an end and I asked her, “Was that fun? Did you like it?”

Her tired, cranky persona kicked in—the show no longer a distraction—and the contrary three-year-old came out.

Shocked, I gave her my surprised face, jaw dropping in an exaggerated manor. “You didn’t? Why not?”

“I wanted to see Rapunzel.”

Mental note: in the future tell her which princesses will NOT be there, particularly if it includes her favorite.

So if you want a show to take the little ones too, this was a great blend of favorites for both girls and boys (minus those like my son who like to gag at any princesses), but don’t forget to dress in layers because the venue will be COLD, princess dresses and costumes fit right in, bring cash for flashy toys in the lobby and food, and if they are little, try to do a matinee instead.

And if your child’s favorite character won’t be in this particular show, TELL THEM. Before the end.

***Note: When this contrary mood strikes you can ask, “Do you like ice cream?” and she will emphatically reply, “NO!” even though the child would eat it for every meal if you let her.

As mentioned, my daughter and I were given free tickets to attend the show.  I was not financially compensated for this post.  All opinions of Disney on Ice and Cedar Park Center are strictly my own based on my experience. And Lil Diva’s.

Kelly K has learned the five steps to surviving of motherhood: 1) Don't get mad. Grab your camera. 2) Take a photograph. 3) Blog about it. 4) Laugh. 5) Repeat. She shares these tales at Dances with Chaos in order to preserve what tiny amount of sanity remains. You can also find her on her sister blog, Writing with Chaos (www.writingwithchaos.com) sharing memoir and engaging in her true love: fiction writing. It's cheaper than therapy.
View all posts by Kelly K @ Dances with Chaos →
This entry was posted in Dances with Chaos, Lil Diva and tagged Cedar Park Center, Disney on Ice Worlds of Fantasy, family, humor, magic, memory, princesses, toddler. Bookmark the permalink.